Meet Me at the Station
-By Bill Glahn-

The Black Crowes guys always seem to pick the coolest cover songs. Fleetwood Mac fans usually fall into two groups, the original Peter Green blues line-up or the Buckingham-Nicks pop line-up. But on his solo album, Through A Crooked Sun, Rich Robinson chose a song from the almost ignored period in between.
I have no idea what Danny Kirwan was writing about when he wrote "Station Man," and he hasn't exactly been available to ask. It could have been about an LSD trip or it could have been a love anthem. But I always hear it as something beyond that - like an homage to the Underground Railroad. Unlike other anthems of the period, for instance The O'Jays' "Love Train" or Cat Stevens' "Peace Train," Kirwan's song didn't exactly have a clearly defined destination. "Where we're going - I don't know, but you tell me I should go" is a thought I would imagine a runaway slave would think who had never been off the plantation. The end of the journey isn't known, just imagined. When Kirwan's train arrives "from ages past" it clinches that for me. This is a song that captures the spirit of civil rights - a soundtrack for the Wisconsin protests, the Occupy movement, Moral Mondays, Texas women, and everything else that's moving forward against great resistance. Let Savoy Brown's "Hellbound Train" provide the soundtrack for the naysayers. 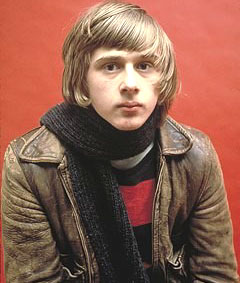 Danny Kirwan
Danny Kirwan, a victim of mental illness and homeless during parts of the 80s & 90s, still walks the planet because of British National Health Care. And according to the bio linked above, has again picked up his guitar. That's a blessing for Kirwan and for the world. But British National Health Care is under relentless attack due to austerity measures as are many social support systems in the U.S. That ain't right. Meet me at the station.

Very few office folks venture out into the warehouse where I work. Even fewer when the heat index rises into 3 digits. One who does is Nathaniel* - our facility IT expert. He’s a pretty friendly and unpretentious guy. Everybody likes him.

Usually Nat shows up, engages in some friendly chat, smiles frequently, and gets the UPS terminal or some unruly printer to function properly, then heads back to his air-conditioned office. Tuesday presented a bigger problem, though. Our RF Scanners (radio frequency) that give us our picking orders were suddenly knocking us off. No info – no work. And in a warehouse that ships over a million power transmission belts every month, that could put a serious hurting on customer relations. The problem was traced to some obsolete routers and antennas located at ceiling level. Seems they couldn’t communicate with some of the new software. Somebody needed to take Nat up in an overhead picker to run new cable and install new routers and antennas. That job went to Duncan* - a young, and somewhat inexperienced warehouseman. He wouldn’t be my first choice as a driver if I were in Nat’s shoes.

But off and up they went. Nathaniel would be working in the unfamiliar territory of a 4 X 5 foot metal platform attached to the back of Duncan’s lift suspended 30 feet in the air with no guard rails in an old warehouse with virtually no circulation. A large warehouse with a flat roof where the sun pounds down – a furnace at the upper levels - the place where many industrial lift operators ply our trade day after day. In July and August, that usually means at a temperature of about 110 to 120 degrees and sweltering humidity.

Nat had been working up there for about 20 minutes with Duncan chatting him up – a couple of computer game enthusiasts enjoying the conversation while one of them worked. When suddenly, Duncan noticed the color vanish from Nat’s complexion, his eyes glaze over, and his body go limp. Nat was passed out cold, heading towards the concrete floor below.

Gravity is often used as a metaphor in songs for fading love, drug withdrawal, and just about everything in between involving downward movement. In scientific terms, Isaac Newton theorized it was a pulling down from the earth. Albert Einstein said the opposite - it was a pushing down from the heavens. For Nat, gravity was no metaphor. And it didn’t matter if it were Newton or Einstein that was right. The results were not going to be good either way.

Which is why OSHA rules require workers in such a position to wear a harness tethered to a bar that runs behind the canopy on the lift. The harnesses aren’t built for comfort. They aren’t even really built to prevent injury. They are built to prevent disaster. One of the oldest practical jokes played by workers in jobs requiring them is to sneak up behind a co-worker and pull the harness up. It will make him stand on his tippy-toes. Fall off a lift in a feet-first fashion and your gonads will end up in your throat. Fall off head-first and you’re liable to bang your head on the nearby racking. But you’ll live to tell about it.

Both Nat and Duncan were abiding by the rules. How Nat fared overall, though, was in the hands of a virtual rookie.

Duncan had two things working for him. Youthful reflexes and that something else that some folks seem to lose along the way - a pre-disposed instinct to protect other human beings. As Nat began his fall, Duncan reached out, grabbed him and held him in a safe and upright position until he could lower the lift to ground level, then carefully laid Nat out on the ground, and called for the first-responder team. The worst injury Nat received was a mild blow to his ego. The best thing, the knowledge that it is of vital importance to keep hydrated when working in extreme heat. And Duncan earned his wings – a rookie no longer.

On July 11, the U.S. House of Representatives passed their version of the 2013 Farm Bill which will cut the safety harness for 48 million Americans referred to as Food Stamps (SNAP). Congress obviously subscribes to Einstein’s theory. That’s some wicked, wicked gravity. But to hell with metaphors. Let’s call the House's bill what it really is. Murder.

*names changed
Posted by Bill Glahn at 1:39 PM No comments:

A Measure of Progress?
-Bill Glahn-

I was almost one year old when an all-white jury in Mississippi acquitted Roy Bryant and John William Milam of the murder of Emmett Till after deliberating for 67 minutes. I was eight when Bob Dylan wrote a song about it. I was probably about 15 before I knew the history behind it. I was 17 when the first official release of Dylan’s song came out on Broadside Ballads, Vol. 6. I’m almost 59 now and Dylan’s "The Murder (Ballad/Death – it has appeared under varying titles over the years) of Emmett Till" is getting more airplay than it has in decades. Not radio airplay, but rather the modern day equivalent – social media, where songs can be posted and played on demand.


As a young boy, I was familiar with Norman Rockwell’s cover paintings for Saturday Evening Post. Everyone in America was. Rockwell painted a feel-good image of America – white America. And he did it on 323 different issues. Rockwell wasn’t prohibited from including black folks in his paintings, but it was The Post’s editorial policy that black folks could only be pictured in a service capacity. This wasn’t viewed as "racist" in those days and even liberal white folks were comfortable with the arrangement. In 1963, a year after Dylan’s early live performances of "Emmett Till," Norman Rockwell painted his last Saturday Evening Post cover. In January 1964, freed from the shackles of Saturday Evening Post policy, Rockwell painted "The Problem We All Live With," which appeared as a centerfold in Look magazine. In stark contrast to his Post covers, "Problem" depicted a very different picture of America, one where Federal Marshals escorted a 6-year old black girl to school with "NIGGER" and "KKK" scrolled on a wall in the background. And with the use of the word "all" in the title, Rockwell correctly identified racism as, not just a problem to concern black folks, but one that should concern all folks. A year later, a preliminary sketch of Rockwell’s "Southern Justice: A Murder In Mississippi" depicting three slain Civil Rights workers, would make the pages of Look. The ugly face of racism and its consequences were now thrust in front of an entire nation by America’s feel-good daddy of the art world. That’s a measure of progress. 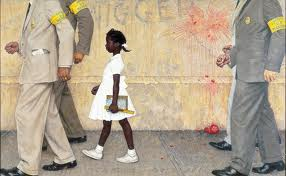 A couple days ago, an almost all-white jury acquitted George Zimmerman of the murder of another black teenager, Trayvon Martin. They deliberated for 16 hours. As everyone not buried under a rock knows, it sparked protests around the country and accusations of racial injustice in the court system. Denials came from all quarters, both liberals and conservatives alike. "We’ve come a long way. And isn’t George Zimmerman the brown-skinned son of a Peruvian mother?" Well, yes he is. He was also acting in a service capacity – a neighborhood watch volunteer guarding white folks’ "stuff" from hooded black teenagers. So, if you buy into the Saturday Evening Post’s version of where people of color should position themselves, it’s a perfectly understandable verdict. If 67 minutes of deliberation versus 16 hours of deliberation is our measure of progress… Well, then we should all be concerned.
Posted by Bill Glahn at 8:33 PM No comments: