This Train of Lovin’ - Calls and Responses: A Symposium on Teaching, Writing and Community (Reflections on my first ever academic conference) 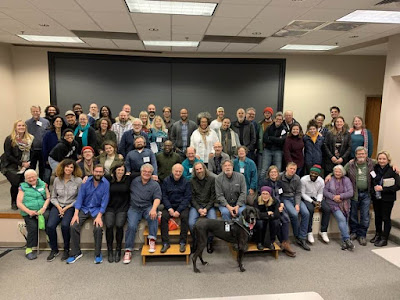 Trains. They’re an often-used metaphor in song for a reason. They symbolize movement. But what kind of movement – forward, backward, tangents? I’ve always approached the metaphorical train with a great degree of trepidation. Is the destination toward a removing of shackles (Harriet Tubman) or death camps?

I’ve written about Danny Kirwin several times over the years, a primary songwriter, singer and guitarist for Fleetwood Mac who took the reigns following the departure of Peter Green and prior to the mass-popularity of the Buckingham-Nicks era. I was singing in a teenage band when Kiln House, the first post-Green album, was released. We were primarily a rock & roll band, with an attachment to the Blues. We played the music of Chuck Berry, Little Richard, The Isley Brothers, but mostly channeled the songs of The Rolling Stones, Johnny Winter, and Alice Cooper. There was something about those Danny Kirwin songs that spoke to me, a sensitivity that we weren’t capturing. Our band included two very talented guitar players who both took lessons from Paul Plumeri, who would later be a member of Duke Williams & The Extremes (one of the few northern acts on Capricorn Records) and an inductee into the Trenton Blues Hall of Fame. As we shifted more towards electric blues more akin to Peter Green’s Fleetwood Mac, I introduced Kiln House to the band. I found an ally in John, our more creative guitar player. Not so much in Sergio, who was all about guitar solos and getting laid. “Station Man” and “Jewell Eyed Judy” made it into the set list. A couple others made it into rehearsal. It didn’t matter. John was the child of a broken home and part of that was that he lived with his father in the summer months in Atlantic City. I was spiraling deeper into drug addiction. And that was the end of Overneath. But “Station Man” has remained one of those lynchpin songs that have kept the wheels from falling off up to this day.

I suppose my attitude toward academia started early in high school. I was something of a whiz at standardized tests – tests designed by and for the folks that can afford a secondary education – a class that didn’t include me. I simply took the tests because they were required and somehow aced them. I was always good at math. Comprehension was something that I had a good handle on. I could comprehend that these tests were designed to split up classes of folks into their “place” in society. Throughout high school my curriculum was chosen for me. I always got placed in academic courses with the “smart” kids, most of whom I had NOTHING in common with, economically or socially. I was a misfit.

It didn’t help any that one of the first lessons I learned in high school came in an English class when we were assigned to do a paper on one of 5 song lyrics assigned by the teacher. Part of the assignment was to deconstruct metaphors. I chose “Happiness Is A Warm Gun.”

I worked hard on that one. But I didn’t meet the teacher’s expectations. I wasn’t “hip” enough to know that the presumed metaphor alluded to shooting heroin, not suicide. I got an “F” on the paper. It was the first time I ever felt compelled to argue with a teacher. I took the position that what the listener hears is often as important as what the writer was writing about. And, anyway, aren’t suicide and heroin addiction closely related? The grade stood. Inflexibility in an academic course was my lesson for the day. As well as the detachment of academics. I made a call with that essay. I was met with a big “Fuck You.” Fortunately, I had a more experienced and encouraging English teacher my junior year, an elder with no predisposition to hipness. It didn’t change my opinion of academic courses any. But it helped to soften it a bit.

Fast forward to the mid/late ‘90s. I was several years into publishing a magazine called Live! Music Review. It was primarily a magazine that featured reviews of bootleg music. We had an editorial policy designed after another publication that I greatly admired since the ‘80s, Rock ‘n’ Rap Confidential. We covered different topics, some that overlapped what RRC was doing, some different. I realized from the first issue that in order to make it worthwhile, I needed people on board who knew how to write and could approach our topics with something deeper than “good recording, good performance, the RIAA are bastards.” Somehow, I managed to attract a group of experienced music writers looking for a chance to address topics that were usually KO’d by their editors. Somewhere in the first two years of the magazine, my path crossed with Dave Marsh. Although never a member of the L!MR writing staff, Dave provided some much needed guidance and mentoring, as well as an article or two along the way. I think it was sometime around 1998 that Danny Alexander, an associate editor at RRC started a sort of idea-exchange/writer’s group called Strat. It focused on the intersection of music, culture, and politics. Race and class played a big part in our discussions. By necessity, it had a limited number of members. About a month or two after it started I got an invite from Marsh. I think his comment (paraphrased) was “I think your addition to the group will be mutually beneficial.” I trusted Marsh. He was a great writer and thinker sans an academic background. Without knowing who was in the group, I jumped in lock, stock and barrel.

It was a group that included some of the most forward-thinking individuals that I knew of, and then some. Academics, teachers, socially aware musicians, veterans of the Poor People’s March, political activists, writers, and even a “Republican” music industry attorney. I was overwhelmed and more than a little intimidated. One of those academics was Professor Craig Werner from the Humanities Dept. (Afro-American Studies) at the University of Wisconsin – Madison. Through a continuing correspondence over the next 20-something years, I found Craig to be a patient and understanding teacher, one who was just as adept at listening as lecturing. This was a new experience for me. I received a new reading list that included such authors, previously unknown to me, as James Baldwin, Toni Morrison, and Maya Angelou. Plus Craig spoke and wrote about music in a deeply understanding and passionate way. I’ve had a growing desire to witness Craig in a classroom setting. Finances and increasing job pressures kept that from happening. Having retired last year, I had a newly acquired availability of time, and come hell or high water, I was going to make that happen. Then Craig announced his retirement.

I would never get to see Professor Werner in the classroom, but another member of the UWM staff and a member of Strat from the beginning, Alexander Shashko, organized a two day Symposium called “Calls and Responses: A Symposium on Teaching, Writing and Community.” Largely made up of panels that featured veterans of Craig’s Afro-American Studies, I was surprised that some of the participants came from backgrounds much like mine. I was amazed at the places they had gone with their knowledge. I wasn’t surprised at all that Craig had found it necessary to protect his students, on occasion, against the hierarchy of academia and the type of sexism and bigotry that infests such places. And I wasn’t surprised at how frustrated some had become in post-graduate studies. Or that Craig’s department was considered an oasis of community building in a desert of class conformity. I heard the term “lean into your ignorance” for the first time.

This had been a practice of Strat from the beginning. I just never had a term to describe it. That Craig, a lifelong member of academia, would lean forward to listen to and examine the words of a low-wage warehouse worker (which is how I spent the first and last 10 years of my working career) was something I had never expected when I first entered Strat. It was something I had to learn to do in return. It’s the most fundamental principle in community building. I was astonished that such a symposium could take place in any institution of advanced learning.

This essay is not an exoneration of academia. It is meant more as an exposé on the possibilities of academia – something the institutions of advanced learning seem reluctant to incorporate. I asked Craig why he chose to retire at this point in his life. He said he needed more time for writing and was tired of the ever-increasing demands on his time for meetings and increasing administrative loads. I’ve heard this complaint from college teachers over the years, and it’s getting worse. I heard it repeated in the panels. There has to be more to college and post-graduate studies than the paper chase and getting published in academic journals. It’s not all that different on the shop floor level. Anytime we heard the word “meeting,” whether we were included or not, it always translated to more bullshit ahead. I’m proud to have had Craig Werner as a friend and mentor for over 20 years. I feel I got the best parts of advanced learning without any of the crap. Or the student debt. And Danny Kirwin’s song still plays in my head after all these years.

Danny Kirwin? Kirwin spent the last 30+ years of his life as a homeless alcoholic in London hospices, visited sporadically by his former band mates, but detached from the world. He had lucid moments, more towards his final days. Kirwin felt the world more deeply than most and cracked under the pressure. In an article by Jim Farber, Fleetwood Mac’s Forgotten Hero, Mick Fleetwood stated, "I cared for Danny a lot and I care for his legacy. Danny was a quantum leap ahead of us creatively. He was a hugely important part of the band." Kirwin was inducted into the Rock ‘n’ Roll Hall of Fame in 1998 as a member of Fleetwood Mac. Often described, by group members as the most sensitive and talented songwriter in Fleetwood Mac, I still carry “Station Man” around in my heart to this day. There’s a pretty good Wikipedia page on Kirwin. Explore the footnotes.

Community is important. Choosing the right community can lead to salvation. Expanding those communities is essential. Those are lessons I learned at my first academic conference. Who woulda thunk I would find one within the walls of an historically wrong way train?

Posted by Bill Glahn at 5:27 PM No comments: