[Reviews by Bill Glahn. I've been working on these on and off over the last year, but never finished up due to other writing projects. These are two of the best releases with many more to come in the next week.]

Bottle Rockets: Bit Logic (2018) From the git-go, Bit Logic finds Brian Henneman (age 57) ruminating about this modern world of technology on the title track. “This ain’t no high tech train wreck, don’t think that’s the deal… It’s the new way of keeping it real,” sings Henneman, painting a somewhat positive landscape. “Be thankful that this old machine still runs, even on these zeros, bits, and ones.” But it’s a landscape pitted with caveats.

“Lo Fi” takes the listener on a journey from the AM kitchen radio, through the wide expanse of home stereo systems, and full circle to listening to music on the telephone. And regardless of the limitations of modern music delivery, a great song can still make his day.

For the Bottle Rockets, though, a band that has built a following on the fringes of rock ‘n’ roll and country with solid albums and relentless touring, the new world has placed some substantial road blocks. Henneman addresses these on the metaphorical “Highway 70 Blues” and the more direct “It’s A Bad Time To Be An Outlaw.” How this will play out in the end is an open question. Will streaming services (the most common form of listening among young folks) cut out the passing lanes for inventive songwriting and performing? Will the pittance of income derived from streaming make it increasingly hard for upstart bands to expand their touring schedules beyond local or regional venues?

Henneman, a master lyricist with a remarkably durable band, has already built a foundation for continuing onward. But there’s that nagging question – “Will such future songwriters/bands ever see that chance?” Maybe. But it’ll be a much longer, slower, road where durability may end up being the most important component. Welcome to the new wave of heavy mettle. (A)


Grayson Capps: Scarlet Roses (2017) Part swamp, part Nashville, part Red Dirt, part outlaw, with some southern rock mixed in, Grayson Capps has the kind of voice that holds it all together as a cohesive voice of rural America. Although it takes a little longer to warm up to than Capp’s 2012 masterpiece, The Lost Cause Minstrels, it is an equally worthy effort, exploring some new musical directions. Topically, all the fears, hopes, and trials of rural America continue to find their way into Capp’s lyrics. Both albums are worthwhile companions to Muswell Hillbillies, The Kinks most Americana-sounding album – a statement on the fears, hopes and trials of urban England.

Capps hails from Fairhope, Alabama, a town located on the east side of Mobile Bay, and one with a rather unique history, having been set up as a socialist experiment in the late 1800s. From Wikipedia… “Their corporate constitution explained their purpose in founding a new colony: to establish and conduct a model community or colony, free from all forms of private monopoly, and to secure to its members therein equality of opportunity, the full reward of individual efforts, and the benefits of co-operation in matters of general concern." How well they’ve succeeded is questionable. Capps concludes Scarlet Roses with “Moving On,” a song that recognizes that. The search for a better future continues.
(A)

Trip Shakespeare’s “Snow Days” isn’t a song that would usually find its way into my rock ‘n’ roll heart. There’s the bloated, almost operatic, singing. There’s the idea that “real” rock ‘n’ roll has its origins in the streets, not the highly academic origins of the band members. And there’s the academic “wit” of some of the lyrics. Chainfields? Motor Veins? But sometimes you just have to put working class chauvinism aside. “Snow Days” has a place in my heart and has had one since I first heard it on a trip to Minneapolis in the mid-‘90s, several years after its release.

It snowed yesterday in Springfield, MO. Snows aren’t unheard of in South Central Missouri or Northwest Arkansas, my primary locations since 1989. They are this early in the year. Having spent a good deal of my growing-up and adult years in New Jersey, there is a certain nostalgia attached to snow. But nostalgia is poor fodder for a good rock ‘n’ roll song.

I’ve got a story. Several, actually.

When my father was transferred to McGuire Air Force Base in 1965, snow days were an opportunity, not an escape from school. For the children of enlisted men, the opportunity was to make some money by teaming up with other kids to shovel the sidewalks. The good money was across the boulevard that separated the officer’s quarters from the lower income enlisted families. In those days, all Base Housing (except for General’s quarters which were comfortable brick houses with landscaped yards a few miles away) consisted of town houses built in courts of 18 units each. In our court there were something like 90 kids – one of the largest concentrations of juveniles in the whole complex and with a sufficient number of snow-shoveling age to form an impressive work force. We learned quickly that the best way to negotiate wages was to team up. Nowadays some people would probably refer to us as “union thugs.” As far as I can determine, Base Housing is now privatized. Probably the snow removal as well.

After my father left the Air Force my older brother and I would team up with other kids in the Holly Hills neighborhood of Mt. Holly (mostly ex-military) and then Prospect Heights, a working class neighborhood in Trenton. Old enough now to have a paper route, my parents were insistent on “saving money for college.” Record money would still be mostly dependent on the annual winter weather. From the beginning, I used the windfall of snow day cash to fuel my passion for music. First there were new singles by chart acts like Stevie Wonder, The Beatles, The Rolling Stones, Mamas & Papas, Aretha, Glen Campbell – mixed with 5 for a dollar cut-out singles of older tunes. I had a lot of catching up to do, having missed the soul wave in the segregated play lists of South Carolina. During the last couple of years of my snow-shoveling days it turned to albums. The last album I remember buying with snow money was the White Album. I probably wore that one out by January.

Once indoctrinated into the world of grown up labor, snow days meant something entirely different. They meant a brief respite from the ever-increasing demands of management. In the 21st century version of labor/management relations, things have declined to a point where labor is expected to brave the weather in all kinds of storms. There are no snow days. Show up for work or else. This includes all types of labor - lower level management, industrial workers, cash-register clinkers, fast-food workers, teachers… all of us. Lower pay, lower benefits, lower safety… “We are all outlaws in the eyes of (corporate) Amerika.”

The guy I most admired at my last job before I retired was the one who NEVER came to work if there was so much as 1 snowflake falling from the sky. The supervisors would make it a point of mocking and belittling him at warehouse meetings. “So-and-so made it and they live 20 miles away. How come you can’t?” It never flustered the guy. “I won’t risk my safety for this job.” He’d been employed there for about 15 years. He was a good worker, knew his job well. They threatened to fire him – never did. Everyone knew it was just his way of throwing the finger at an employer who didn’t want to pay him anything close to his value. Still… there were those who succumbed to the pettiness and labeled him a “sissy.” The fucking guy had more guts than all of them combined. As far as I know, he’s still employed there. I’m positive he didn’t go to work yesterday.

What has all this got to do with “Snow Days,” the song?

It’s this. Despite an aura of pomposity, when it comes right down to it, “Snow Days” envelops the subversive nature that is essential to a lot of great rock ‘n’ roll – this time with a beautiful arrangement and a calming piano break. It tells the tale of a dedicated and overworked teacher on a day when the snow is falling. And the respite that a day off can provide, if she’ll only take it. "There’s a blessing on the ground. Go home." That's rock 'n' roll.

Bonus photo: These are agricultural fields between Camarillo and Oxnard in Ventura County, SoCal where HillFire & WellseyFire have been burning since last week - agricultural workers are still expected to show up for work. Photo by Irvin Camacho. 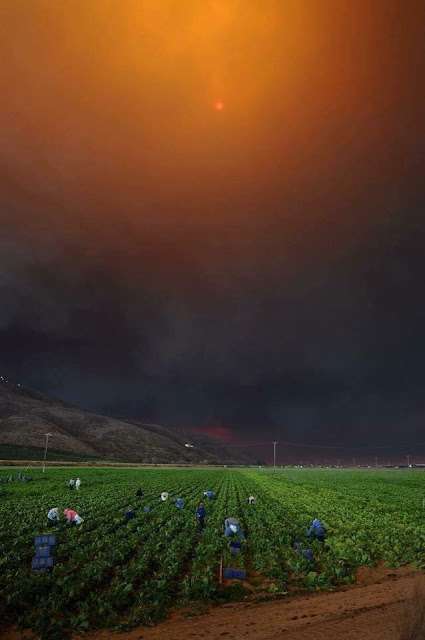