Good for The Body, It's Good For The Soul 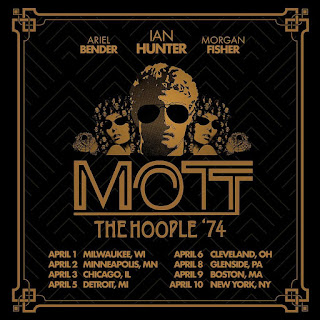 “Hope I die before I get old” (Pete Townshend, The Who)

“No, you're never too old to rock 'n' roll
If you're too young to die” (Ian Anderson, Jethro Tull)

“Once you're gone
You can never come back” (Neil Young)

“Behind these shades, the visions fade, as I learn a thing or two
Oh but if I had my time again you all know just what I'd do” (Ian Hunter, Mott The Hoople)

It’s hard to believe that anyone ever took the first of those song lyrics as anything other than youthful hyperbole or overstatement. Sadly, some did. Even more sadly, some never got the choice. For the rest of us aging music fans that have been more fortunate, sometimes despite our worst flirtations with self-destruction, it’s that last lyric that retains the most meaning.  But there’s more to this story than that.

Mott The Hoople has embarked on their first tour of the United States in 45 years. Officially dubbed “Mott The Hoople ’74,” the line-up consists of the 3 living members of the band that infiltrated Broadway (The Uris Theatre) on their final U.S. tour, making no concessions in the process. That riotous affair is well documented on their Live album, with an even better documentation coming later on the 30th Anniversary edition of that record. This time around, the band would be supplemented with Ian Hunter’s Rant Band, a superbly talented group that has been backing Hunter for well over a decade. But what can be expected of a band that is fronted by an octogenarian (I’m not going to split hairs here), a septuagenarian, and another soon-to-be septuagenarian?

Ian Hunter is 4 years younger than Elvis would have been. He’s older than Bob Dylan. He’s had major hits as a solo artist, including the massively popular “Cleveland Rocks.” Simply put, he’s the spiritual link between rock ‘n’ roll and rock music. And he’s made some of the best music of his career in the last decade with little fanfare.

Ariel Bender (Luther Grosvenor) cut his teeth in Spooky Tooth before joining Mott The Hoople. He closed out his career as a “rock star” a few years later in the under-appreciated Widowmaker. High profile sightings since then have been scarce. Occasionally he pops up on some albums by British Blues artists such as Peter Green.

Morgan Fisher has had a more illustrious post-MTH career, even as the least recognizable name of the three. He’s been a member of Queen’s touring band. He’s produced records by the Dead Kennedys, Jayne County, and Cherry Vanilla. He’s worked with artists as diverse as Robert Wyatt, Yoko Ono, and Jah Wobble to name but a few. He was the last of the three to leave the band, soldiering on with the truncated moniker Mott. But you’re more likely to find his name in the credits than on the marquee.

I caught the current tour on its 2nd night – a packed house at Minneapolis’ fabled club, 1st Ave. The opening act was The Suburbs, a hometown act that has received some acclaim nationally and hero status in Minneapolis. They didn’t fail to disappoint, delivering a short, though high-energy set. The Minneapolis music scene has always been one noted for looking more forward than backward. The Suburbs would be a hard act to follow. They’ve been around a long time, but on this card they would still be the young dudes.

Then intermission, that time when smokers gather outside before re-entering for the headliners. Except few were willing to give up their spots in the front rows, no matter how serious the addiction. I would have to view Mott from the back near the soundboard – not the greatest visual advantage, but at least the sound would be the best in the room.

Mott The Hoople began their 2019 show the same way they started the 1974 shows, with a short rendering of “American Pie.” When Hunter gets to the line “the day the music died,” he asks “Or did it?” And the band tears into “The Golden Age of Rock ‘n’ Roll.” The subtleties of the lyric are often overlooked. This song is no nostalgia trip. It isn’t “it was the golden age of rock ‘n’ roll” - rather Hunter sings in the present tense.  And he’s always sang in that way whether it be 1974 or 2019. Morgan Fisher pounds the keyboards Jerry Lee Lewis style. Ariel Bender, like a mischievous leprechaun, moves towards center stage for some youthful shenanigans and some heavily amplified guitar. If Hunter’s songwriting provides the spiritual link, Bender and Fisher are the perfect vehicle to provide the aural one. Onward.

What followed for the next 35-40 minutes was a trip into the deep tracks. Some REALLY deep. For those who have followed Mott The Hoople with a high degree of attention from the beginning, it was a rare treat to hear these songs in a live situation. But for a lot of the crowd who had been weaned on classic rock radio, songs like “Alice,” “Rest In Peace,” and the complex tenderness of “I Wish I Was Your Mother” didn’t resonate so well. And just when they seemed to gather the crowd back in with a scorching version of “Sweet Jane,” Mott proceeded to play “Rose,” the non-LP b-side to “Honaloochie Boogie.” Blank stares. No matter. Ariel Bender was in the building.

“Mott The Hoople 1974! …1974!! …1974!!!” he shouted as he crossed the stage, which was being cleared by the members of the support team. Hunter, for the only time in the show, grabbed his famed Thomas Maltese Cross guitar (most likely a replica, the first sold years ago). Only the rhythm section of The Rant Band remained with the featured front three. Could the old geezers do it – blow this crowd away like they did 45 years ago? In spades. “Walkin’ With A Mountain” rocked the building so hard that it could have blown the roof off. If only the roof hadn’t been replaced a few years ago. This is the band everyone came to see. From then on, there was no turning back. And like the invasion of the “sanctity of Broadway,” no concessions were made. No key changes for aging singers. In fact, Hunter’s voice seemed to grow in strength with every note. Ariel Bender worked the stage hard and the amplifiers harder. When The Rant Band came back to the stage, nothing changed. By the end of “All The Way From Memphis,” Morgan Fisher was blowing on his fingers. Hunter’s scathing rebuke of predatory Capitalism, “Marionette” was never more appropriate than in times like these. And for the rest of the show, MTH ’74 had the crowd. They left the stage almost void of sweat and big on smiles, returning for a 2-song encore of their most famous song (“All The Young Dudes”) and the late-period single, “Saturday Gigs.” What a show!

.But as I said at the beginning of this ramble of a review… There’s more to this story. Sure – it put some spring back into these old legs, as I’m sure it did for many. But there was something more than feeling invigorated. The final line of “I Wish I Was Your Mother”… And then who knows / I might have felt a family for a while. Morgan Fisher is shooting home movies of this tour just as he did in 1974. In one of the better uses of social media, you can keep up on Fisher’s Facebook page. It should become immediately apparent that this tour is just as much about family connections as it is about finding new vitality in old bodies.

In between the Suburbs’ set and Mott The Hoople’s, I stepped outside to feed the nicotine dragon and ran into the manager of one of Minneapolis’ trending young bands, The Carnegies. Barely legal to be in a club serving adult beverages, Jacob Harmsen was clutching a couple of records (vinyl!) that predated his birth by a good 2+ decades. He was eager to get back inside to try to work his way to the front of the stage to see his musical heroes close up. And maybe, just maybe, get his records autographed at the end of the show. I recognized that youngster. It was me many, many years ago. And I’m willing to bet he made it. No matter what form it may take, rock 'n' roll is in good hands these days. It's good for the body, it's good for the soul. And the future looks just a little more optimistic today than it did yesterday.