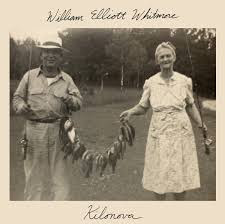 When William Elliott Whitmore began his opening set at the Granada Theater in Lawrence with “Mutiny” on Oct. 22, he was clearly in a defiant mood. So was the crowd, answering the call & response with vigor.

Whitmore, armed with only banjo and bass drum, was attacking both with vehemence. And an urgency that these times call for.

Will Whitmore is a farmer by birth. He’s been planting seeds at shows in Lawrence, Kansas for 19 years by his own account. It showed. This crowd came early - no stragglers or “fashionably late” hipsters. When Whitmore took the stage, everyone who was going to be there was already there. And the joint was packed.

Whitmore has a voice that sounds like it grew up out of the dirt. There’s a welcome quality to it that contrasts to the, too often, dry vocals of too much of today’s politically oriented Americana. It’s field holler singing. And that makes sense. Whitmore still lives on the family farm in a house that has no bathroom. His albums tend to be short – more akin to vinyl length - no filler. He’s not wired for the “technological age.” His only contact info on his web page is a post office box.

Whitmore has a new record out. (cd, vinyl and download). It’s called Kilonova and is a departure from past releases in that it consists completely of cover versions. Don’t expect a “Great American Songbook” nostalgia trip, though.  Some of the songs will be familiar to long-time followers from past set lists. These are songs that Whitmore finds a kinship with, interpreted in a way that is 100% personal.

There’s a wide range of material on Kilonova, songs from artists that predate his birth to songs of a more contemporary age that you might expect from a man of Whitmore’s age (40). The first Youtube release was The Magnetic Field’s “Fear of Trains.” The second was “Busted”, written by a songwriter with farming roots, Howard Harlan, and recorded by both Johnny Cash and Ray Charles in 1963.

In Whitmore’s hands, “Fear of Trains” is starker than the original, captivating the flavor of the lyrics more fully. In light of the recent Kavanaugh hearings, it’s downright prescient. “Busted” is the state of being for working class Americans in this century. But there’s more.

“Don’t Pray On Me,” “Five Feet High And Rising,” and “Ain’t No Sunshine” all capture a sense of desperation that exists today. “Bat Chain Puller,” the conclusion of Kilonova, exposes the root of that desperation, rife with metaphors that a man of the dirt can appreciate.

Whitmore concluded his concert in Lawrence where he started – with “Old Devils,” a song referenced in “Mutiny” delivered with the same fervor. The man has stamina! It’s going to take a good dose of that from his audience as well. Lawrence was up to the task.

I’ve been travelling around the Midwest with my dog, Sally, taking notes. In the last few days I passed through eastern Iowa and western Wisconsin, home turf for Will Whitmore. It’s under water. Said one farmer, "I'm about to break the first rule of farming - never complain about the rain. What started off as a '100 year rain' is now a 500 year rain. If it rains like this for another week, there won't be a crop to harvest." The preservation of the earth is high on William Elliott Whitmore’s priority list. He starts the second leg of his tour tonight with label mates, Murder By Death, in Washington, D.C. at the 9:30 Club. If the crowd responds loud enough and long enough maybe the politicians at the Capitol will hear them. “Let the motherfucker burn!”

Posted by Bill Glahn at 2:14 PM No comments: