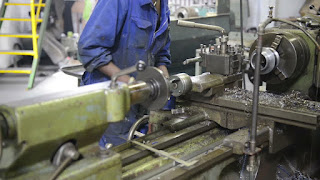 When Blind Alfred Reed wrote “How Can A Poor Man Stand Such Times and Live” at the beginning of The Great Depression, he was singing about the hopelessness of poverty when there were no jobs available. Great advancements among the work force were made over the following decades, only to see them trickle away again over the last 40 years. Sure – the labor reports state very low levels of unemployment these days. But wages in real terms are fading.

But the most ignored concern among workers by media and politicians alike, is the abysmal state of workplace safety - the callous disregard for worker safety by employers. The stripping of OSHA funding and powers, including the absurd policy of “self-reporting” wherein company reporting of incidents replaces actual OSHA inspections. Restaurants receive far more scrutiny from the local health department than operations where heavy and dangerous equipment and chemicals are in daily use. And that has far more to do with the restaurant patrons’ safety than the actual safety of the restaurant workers.

When President Trump gave his speech last week in Springfield, MO asking for more corporate tax relief – the same “trickle down” economics that have failed American workers for the last thirty years - there was zero mention in the news reports about the abysmal safety record of Loren-Cook  the facility that Trump chose to give his (private) speech. And why should there be? Loren-Cook was exonerated in the death of one of their workers in 2009, weren’t they?

Well, no. Not really.

With about 1,000 employees, Loren-Cook is one of Springfield’s largest employers. Sales exceed $100 million per year.  But when it comes to spending some of that money to protect the safety of their workers, Loren-Cook not only can’t seem to find room in the budget – they show a callous indifference even after a worker dies.

From court records: "After the May 2009 accident that killed a worker, at least one lathe operator reattached a guard to his small lathe. A Loren Cook supervisor questioned the operator about the guard and later removed it. This guard, and other guards that previously had been used on small lathes, were purportedly removed for inspection. The guards, however, could not be located when demanded by the Secretary [of Labor] in this matter. The Secretary moved for sanctions alleging spoliation of evidence.”

OSHA made a finding in the case and issued a fine of over a half-million dollars. From Department of Labor/OSHA records:

Seven instance-by-instance willful citations at $70,000 each are proposed for failing to guard seven manual spinning lathes, with a total proposed willful penalty of $490,000. OSHA issues a willful violation when an employer exhibits plain indifference to or intentional disregard for employee safety and health.

Three serious citations with penalties totaling $21,000 are proposed for a lack of adequate personal protective equipment for workers' faces, extremities and hands. OSHA issues a serious citation when death or serious physical harm is likely to result from a hazard about which an employer knew or should have known.

End of story? Not quite. An Administrative Law Judge (U.S.) overturned the fine on a technicality. “According to the ALJ, the regulation at issue only required guards on the lathes to prevent debris or waste material from being ejected; it did not apply to guard against the ejection of the actual item being worked on, i.e., the ejection of the actual workpiece.” [court document] With years of experience in the manufacturing process, I can attest that sometimes companies remove these necessary guards for efficiency reasons. As in, the “waste material” can sometimes clog the machinery and cause down-time for cleaning – easier to sweep the shavings from the floor, even at the expense of the workers safety.

In 2014 the Labor Department appealed the ALJ decision to the United States Court of Appeals, Eighth District. The Court of Appeals upheld the technicality. The Department of Labor issues an annual list of OSHA cases against companies after workplace fatalities. The 2014 fiscal year contains 61 pages with an average of 15 cases per page. The 2015 report (last available in pdf file lists 81 pages – an increase of 30% in one year. How can a poor man stand such times and live? It’s a question still worth asking – and for more reasons than one.