Black Dog in the Land of the Ice & Snow 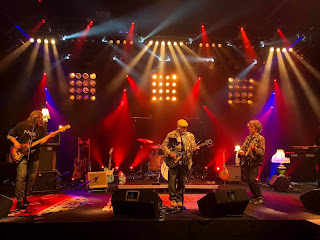 [Most of my energy these days is focused on Travels With Sally, more of a cultural review than a travelogue. I’m finding that, in some cases, those travels include stories that don’t quite fit the narrative of the book-in-progress, but are nonetheless worth writing about. This is one such story. (Bill Glahn)]

I made a mix CD of “Sally” songs and “Dog” songs for Sally a few years back. Little Richard’s “Long Tall Sally.” “Sally G” by Paul McCartney. 3 versions of “Sneakin’ Sally Through The Alley” (Lee Dorsey, Allen Toussaint, Robert Palmer). Humble Pie’s “Big Black Dog.” Led Zeppelin’s “Black Dog.” And of course, among others, Patti Page’s “How Much Is That Doggie In The Window.” She seems to like them all - at least she doesn’t leave the room when they’re playing. Most of all, she likes the ones with her name in them. For those, Sally moves closer to the speakers. Sally is very self-aware.

On a trip through the heartland this past Fall, things were cut a little short due to foul weather and mechanical problems with Rocinante Jr’s power plant – a 2001 Ford F-150 extended cab pickup. For the uninitiated, Rocinante Jr. is a tiny cabin on wheels – home away from home when we are traveling the country. After a few weeks of home-stay, Sally was itching to hit the road again by late October. So was I. This would be a short trip, though, a 2-day quickie up to Minneapolis to see Zeppo film a live promotional film.

“Do you want to see Zeppo play ‘Black Dog?’” Sally raised no objections. With our chariot still on the blink, this time it would be in the more comfortable (and dependable) confines of the Chevy and a hotel. Onward to the land of the ice & snow. 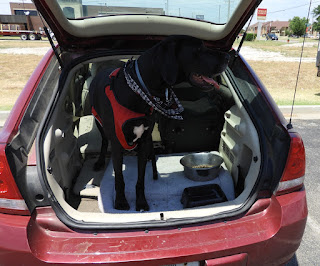 I’ve known Zeppo guitarist and lead vocalist John Eller for almost half my life. We met sometime at the end of the ‘80s at a record convention in St. Paul (The old Kelly Inn show). But the first time I really took notice of his singing talents was at the annual Philadelphia Record Convention – a huge affair held every Thanksgiving weekend at the Valley Forge Convention Center. As was the tradition, when a lot of record dealers and music fans from around the globe met up, there were always some late night eats, drinks, and catching up to do. On this particular night we ended up at a dining facility that also served as a karaoke bar. A few vendors, seasoned veterans of defunct bands who found better economic rewards in selling music rather than playing it, signed up to sing. This would be a much better than average night of karaoke singing. With some encouragement, Eller scanned the play list and picked out an Aerosmith song. Then proceeded to slay everyone in the joint. Not even the host singer wanted to follow THAT act.

Eller, who had already had regional success in the Minneapolis area with Paradox, a glam metal outfit that included some originals mixed with covers in their live act, would release his first CD of original tunes the following year with his band, The DTs.

Eller’s musical path has taken a lot of tangents since then (Eller-Lynch, Retrofit, The Shiny Lights, Shabby Road Orchestra, countless studio sessions). But the origins of Zeppo lie in a basement jam session in 2016 – the kind of thing musicians who have love and respect for each other do for fun. It was there that Eller, drummer Noah Levy (Brian Setzer Orchestra), guitarist Terrance J. Fisher (Run Westy Run), and bass-player-about-town Paul Boblett (Fathom Lane, Faith Boblett, and King James Version) discovered that they all had a mutual love of Led Zeppelin. With prior commitments, the idea of forming a Zeppelin cover band would be put on hold for a couple of years. When Brian Setzer decided to pursue a 40th anniversary Stray Cats reunion tour and album, that freed up the globe-trotting schedule of Levy. Done deal. Almost. The band would add Zach Sershon,  a classically trained keyboard player and the organ player for The Minnesota Timberwolves, to add the final touches on those epic Zeppelin tunes like “No Quarter” and “Kashmir.”

But this would be no Branson-style stage show. Zeppo’s motto would be “no wigs, no bullshit.” The band’s approach would be to explore and expand (in some cases) on the nuances and subtleties of those well-known Zeppelin grooves. And to rely solely on their musical and vocal talents to get the job done.

Sally and I made the trip overnight, checking into the hotel on the afternoon of the show. It was the longest I’d driven in one stretch in years. Of course, we took a few stops to pee and stretch our legs, extending a 7-hour drive into 9 hours. Sally endured without ill effects, but my legs were cramping up. We took a nap before heading out. Sally did her job as a service dog, supported me as I struggled to maintain balance and walked me around the parking lot a few times to get my “legs” back. Sally’s job was done for the day, but I wasn’t sure if the staff at A440 Studios would allow her in the building without her service cape. Sally, a veteran of music venues, can usually go into places in “off-duty" gear where she is known. This time I dressed her up and we headed out.

I’ve been in some nontraditional studios in the past – but A440 Studios was something new to me. Located in an industrial park, A440 Studios not only included the latest in recording technology, but also a concert stage (including a dry-ice machine), an elaborate lighting system, filming gear, enough space in front of the stage to accommodate over 100 guests. AND a knowledgeable staff sufficient to coordinate all of it. Off to the side was a Bohemian-style “lounge” area that included a couch and comfortable chairs.

Sally and I greeted John outside in the parking lot, caught up a little on things, took a few photos, and proceeded into the building. Studio manager Steve Kahn would not only welcome us, but ask permission to pet Sally (usually a no-no for service dogs on duty). OK! Steve Kahn is a dog person. Permission granted. This was a welcome sign and a signal to Sally that she could proceed in a more relaxed atmosphere. Sally did her thing as the crowd began to trickle in - working the room like the ambassador of good will that she is. I met up with some friends that I hadn’t seen in far too long, sought out Facebook friends that I have never met in person, and made some new friends in the process.

Then Zeppo took the stage. “Misty Mountain Hop.” The joint was rockin’!

But how would Zeppo measure up compared to the live Zeppelin experience? As editor of the defunct Live! Music Review magazine, I wrote the Z-files monthly bootleg column for 7 years. I’m overly familiar with the excitement and the pitfalls of that legendary band in concert. The phrase “tight but loose,” has often been applied to Zeppelin by fans. But all too often (especially in the middle years), that would translate to “far too loose, self-indulgent, sloppy and boring.” Any semblance of “tight” would come late in the band’s touring history – the 1980 final tour where the set list was trimmed from 4 hours to 2, and onward to the Page/Plant tours where a similar approach was used.

With two excellent guitarists on stage, Zeppo would follow a template laid out on the Zeppelin studio albums – tight arrangements, exemplary guitar interplay, not a bad vocal performance in sight (Plant was notorious for experiencing throat problems on any given night), and a rhythm section that kicks ass. Sershon was a much welcome addition, resorting to some variations on the keyboard parts without overextending them. But don’t get the idea that Zeppo performed carbon copy performances of Zeppelin records. To ears tuned into those records for decades, the differences come in subtle places and add, rather than detract, from the performances. That’s what musicians of this caliber do.

Sally’s highlight? It was hearing her name mentioned in the intro to “Black Dog.”

A needed night of sleep for Sally and myself followed, before a morning breakfast (NOT at the crack of dawn) at the Bandbox Café with John & friends, including John’s canine companion, Shilo. Then off to the old Eller homestead, occupied currently by pal Dave Biljan. Sleepy-eyed Dave had a no-miss work commitment the night before and missed out on all the fun. We kept him from his own much-needed sleep for a few hours, but he was a trooper. Oh the joys of being retired.