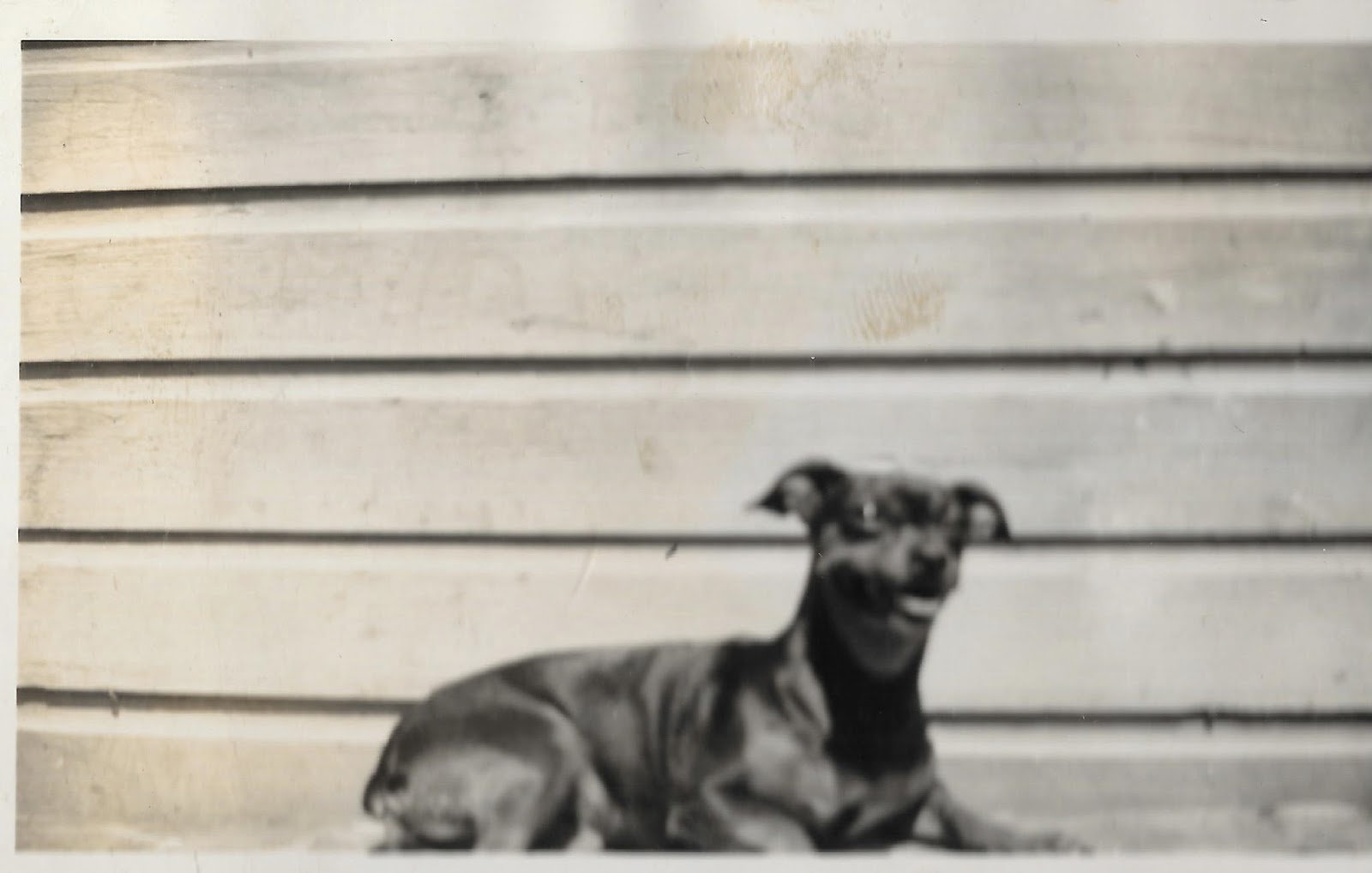 There's a sort-of joke that so many Blues songs begin with "woke up this morning" beacause everything in the tale goes downhill from there. Not such a joke when you consider the origin of the Blues. I can only think of one non-Blues song that begins with that refrain, The Byrds' "Mr. Spaceman." But there's enough in that song's brief narative to almost qualify. That's the song that was playing in my ear buds as I approached a 50-ish couple and their dog walking in the opposite direction on the path around Lake Drummond this morning.

It's been about a year and a half since I walked around Lake Drummond - something that used used to be an almost daily routine - weather permitting - until life got in the way. Much longer hours at the job, accelerated utilities and health care costs, fix-up projects that I used to be able to pay other people to do - it all adds up to all work, no play, dull boy.

I've always had a passion for dogs, large and medium. Not so much the small guys, though. Maybe it's because the only time I've ever been attacked by a dog it was a small one while I delived papers as a young boy. Small dog, big teeth, zero leash. Although I pedaled away on my bike as fast as I could possibly manage, that bugger not only had big teeth, it had legs like a gazelle.

Maybe it's because as a young adult doing exterminating work, I had the displeasure of doing a flea job in an exclusive neighborhood where I was greeted at the door with, "Watch where you walk in the living room. The maid doesn't get here until 10 o'clock."  A chijuajua this time with a sense of entitlement that rivaled it's owner's.  As I dodged the landmines, that aristocratic flea bag snuck up from behind me and nipped my achilles tendon. This time I scooted it away with my foot and it kept good distance from then on. I should have put my boot up the owner's ass. "Get rid of your dog's fleas your own goddamn self. And while your at it, give the maid a break and clean up your own goddamn dogshit." But I was a professional. Which translates to, "I needed the job."

Or maybe I've seen one too many episodes of Judge Judy where some rich dame (the defendant) tried to explain why it was an infant's fault when her pedigreed hair ball jumped out of her Gucci bag in a store and bit the child on the arm. Which was exactly one such episode. Her "child" would never show such bad manners. The other child must have provoked it. Leashes are, apparently, only for the pets and children of common folk. And store rules prohibitting pets don't apply if you can afford to buy the store.

Yeah, I have some class issues. But it's not class envy. I'm never going to have a toy pekipoodle as a pet, even if I hit the lottery.

I've been on the quiting side of nicotine addiction for the last 4 or 5 months with varying degrees of success. None for a week. Back on the nails for another week. To Buproprian or not to Buproprian? - an anti-depressant with a knack for killing cigarette cravings.  The way that worked out was a healthier Bill with flat emotions and a suspect short-term memory. How short? I can forget what location I have to drive my forklift to between the time I look at my scanner and the time I turn the key. That'll never do. At the moment, I've settled on a workable medium - no Buproprian, 2 cigarettes a day. Food works as a better substitute than Buproprian. The down side, though, is I've gained 15 pounds this Winter.

For only the second time this year, I had off on a Saturday. Some boss in the upper stratosphere decided it was time (again) to cut overtime and notified the bosses in the lower stratosphere that, having never stepped foot in a job that involved manual labor, he had deduced that a reduction in labor costs could be obtained by making the hands move faster.  This will last until the next big customer threatens to give their contracts to a rival company because their stuff isn't arriving on  time.

No Saturday work. Beautiful day. 15 pounds to lose. Time to reacquaint myself with the Lake Drummond walking path.

The parking lot at Lake Drummond was filled this morning. That's not surprising as the Spring-like days begin to outnumber the Winter-like days. It's time for most folks to shake cabin fever. On the walk from the parking lot to the walking path, I noticed that the play area for kids was packed. A couple boys tossing a football around. A dad having a baseball catch with his son. A group of girls kicking a soccer ball around. Plenty of parents pushing their toddlers on the swings. Older folks and sweet-hearts (sometimes they were both) strolling through the botanical gardens. People still do this kind of stuff?

The walking path was really active as well. Roaming photo enthusiasts snapping the scenery. Joggers jogging. Folks with 15-pounds of Winter growth strolling. Not-shy squirrels grasping the trees on the people side of things. "We don't have to dart to the opposite side. It's a park. You can't hunt us." Dogs. Lots of them. Big, small and in-between. The poop-bag posts were well-supplied - a tribute to the park staff. And the empty plastic bags were being filled at a brisk pase - a tribute to the park visitors. It seems no one was waiting for the maid to arrive. Most of the migratory birds haven't returned yet.  But enough waterfowl to let you know that the rest of the flock will be arriving soon. It was a pleasant day for all god's creatures.  Including this one.

Before I left for the park, I loaded up my MP3 player with a varied mix of tunes. I used to load it up with "loud & fast" to set a pace for my walks. A fast pace after a long absence wasn't going to work today. On the second lap around Lake Drummond "Mr. Spaceman" kicked on.

"Mr. Spaceman" was an odd tune for The Byrds when it came out. It's from that period between their fame as the planet's best Dylan cover band and their evolvement into the era's best live country-rock outfit. It wasn't protest music and hinted more than a little at country. I guess if I had to pin it down, I'd call it early country-rock that retained folk-harmonies - the vocal style associated mostly with the 60's collegiate folk "revival." But mostly, folks viewed it as a "ditty" or a novelty song recorded in the midst of the space race. A funny little pop tale about martians.

Eventually, with a re-vamped (overhauled, really) line-up that retained Roger McGuinn and added Clarence White, a live version of "Mr. Spaceman" was released on the Untitled double LP (half live, half studio). It served as a great set pacer, adding nearly a full minute of barn-burning picking by White, and dirtier backing vocals behind McGuinn. "Mr. Spaceman" was now a full-fledged country-ROCK tune. That's the version that was playing in my ear-buds as I approached Mr. and Mrs. 50-ish and their pet Scottie - a dog on the fringe of "tiny."

"Woke up this morning with light in my eyes... and then realized it was still dark outside." McGuinn begins singing a tale of friendly strangers to the planet encountering folks who get "uptight" by their appearance. As the song progresses, the protagonist pleads with the strangers to take him with them when they leave. But in the end, he decides to stay, wishing them a safe journey home.
With the distance closing to about 10-feet between us, Mr. 50-ish seemed almost refreshed, Mrs. 50-ish fully refreshed, and Scottie satisfied to be right where he was. He looked up at me and raised his right paw. I laughed and pulled out my ear buds.

"Does he want to shake my hand?"

I bent over and shook his paw. "Well, I like you, too, little fellow." We all smiled and waved good-bye. I hope they get home alright.

I'm going to be a little more cautious in the future about letting work get in the way of life.

Posted by Bill Glahn at 5:12 PM No comments: