A Ghost From Christmas Past: Ray Davies and Charles Dickens 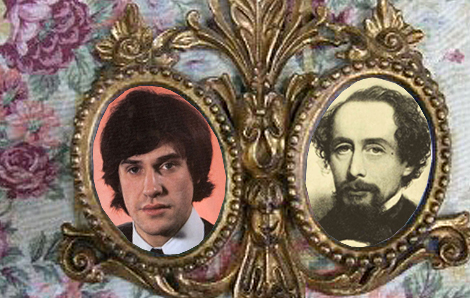 [Previously published several times, first on the Holler If You Hear Me blog, and subsequently on the Chicago Labor and Arts Festival blog and the Bigo magazine website (Singapore). I haven't rolled it out in awhile, so here it is again. (Bill Glahn)]

Ray Davies and Charles Dickens are both British. Both tell stories entrenched in the landscape of the British working class. Both are great writers who draw their audience in with the richness of their characters. Both celebrate the spirit of humans and the working class in particular.

“Yes, and both have surnames that start with D,” some stuffy Dickens scholar might scoff. But put academic prejudice aside, and the case could be made - with some notable differences.

Dickens’ influence on Davies shouldn’t come as any great surprise considering Dickens’ status in the world of British literature (second only to Shakespeare). Any British author who chooses to address the issues of class would almost have to be influenced by him to some degree. Davies’ body of work bears more than a casual resemblance.

But to say that Davies is simply putting a new tread on an old tire would be a huge misconception. The reasons are no more apparent than two short stories set in the Christmas season - A Christmas Carol and the Kinks’ “Father Christmas.” In the Dickens story, Scrooge is redeemed. In the Kinks holiday single, the antagonist is not.

The philosophy in Dickens’ Christmas Carol is more black and white - the ruling class is redeemed when confronted by an outside manager or controlling force - a holy trinity of ghosts. In the Kinks’ song, there is no outside manager and the antagonist is motivated by real life events - his father is out of work. In Dickens’ moralistic world, Davies would be a schoolboy in disgrace. In Davies’ pragmatic one, Dickens would be a used car spiv.


I’ve always found Davies’ body of work to be the more complicated to decipher - more shades of gray. More unanswered questions. At first glance, it’s a darker world where it seems everybody has an agenda. And that agenda usually involves control of the working class.

That’s some pretty cynical stuff. Or is it? There’s just too much in the Davies canon to suggest otherwise. Dickens’ work is rooted in moral failures that transcend class boundaries. Davies’ work targets systemic problems in our society.

To be fair, A Christmas Carol was written very early by Dickens (1843), while Father Christmas was written by Davies several years (1976) after his most notable commentary on class issues - The Kinks Are The Village Green Preservation Society (1968) through Preservation (1973).

Father Christmas is more like a coda where Christmas Carol is far less mature in nature. By the time Dickens gets around to writing Hard Times (1854), much of his criticisms fall in line with Davies’. A school system that stifles creativity in the name of economic progress. (Dickens gets the nod for creative names with Mr. McChoakumchild). An uncaring upper class who justify their importance with myths (industrialist and banker Josiah Bounderby). A perverse thought process that makes pollution a healthy commodity.

But in the end, as with all of Dickens’ work, he hangs on doggedly to morality as if were synonymous with salvation. Bounderby dies of a fit. His cohort, Mr. Thomas Gradgrind, is saved by renouncing his “just the facts” obsession and replacing it with a code of faith, hope, and charity. All’s well that ends well.

In 1856, British novelist George Eliot (Mary Ann Evans) wrote, “The thing for mankind to know is not what are the motives and influences which the moralist thinks ought to act on the labourer or the artisan, but what are the motives and influences which do act on him.” She goes on to criticize Dickens, “if he could give us their psychological character… with the same truth as their idiom and manners, his books would be the greatest contribution Art has ever made to the awakening of social sympathies.”

Father Christmas is not the first time Davies utilizes dark humor to illustrate a truth. In Muswell Hillbillies’ “Complicated Life”, he hits the bullseye with the story of an ill worker who is told by his doctor that he needs to slow down or face death. “Cut out the struggle and strife.” So the guy quits the rat race and finds

When it comes to quality of life for the working class, capitalism is a deadly calamity. As for psychological evaluation - on Muswell Hillbillies, Davies introduces the idea of mental illness as purposefully inflicted on workers by the ruling class (Acute Schizophrenia Blues). It’s a reoccurring theme in Davies’ writing, including his “autobiography,” X-Ray - a book written in 1994 but culminating in his personal history at Preservation.

On Preservation, Davies restrains from preaching (the domain of moralists). He, instead, looks both backwards and forwards in a pragmatic way and correctly predicts a more totalitarian existence should social change be directed by ideologues and moralists.

At the beginning of X-Ray, Davies proclaims “I was born a king.” His most affecting song opens with the words “Everybody’s a dreamer and everybody’s a star” Despite its title (Celluloid Heroes) and story line, it is not simply a song about Hollywood stars and starlets. It is a song about struggle. And it recognizes that, while struggle is not always successful, neither is it futile. We are not born cogs in a corporate reality. That is learned behavior. That is mental disease.

Not too many people would call Dickens’ feel-good endings to Christmas Carol and Hard Times cynical. But which is cynical? The idea that we are forever bound by a class system not of our making or that we are all born kings?

Unlike Dickens’ morality, Davies’ work offers no cure-alls for society. In fact, he often sounds as confused as the rest of us. But he does offer a starting point. Here’s to the birth of kings. (Bill Glahn)
Posted by Bill Glahn at 12:48 PM 2 comments: