A Look Back at John Prine’s Common Sense 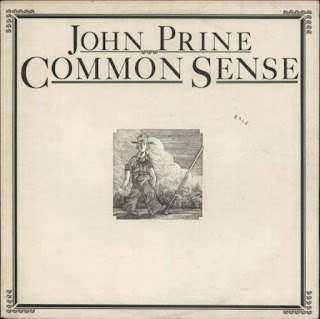 
In our faulty collective memories, we would like to think that John Prine was a commercial success from the moment his first album was released. Over the decades, practically every song on that album has entered the realm of familiarity to so many music fans that it would be hard to imagine that it never reached Billboard’s Top 100 albums. But it didn’t. Not even close. (Though that may change this week.) Neither did his second. Or third. If we had become familiar with Prine’s early songs it was through the voices of other performers like Bob Gibson (country), Swamp Dogg (r & b) and Bonnie Raitt (rock). Prine’s songs made the transformation across genres because they were rooted in humanity in a way that was unique to Prine.

It wasn’t until Prine’s 4th album, Common Sense, that the public took notice, reaching #66 on the Billboard charts. But what did the public know? Critics slammed the album as being overproduced and lacking in humor. It didn’t pass the folk purity test. The criticisms sounded an awful lot like the ones that greeted Bob Dylan’s Bringing It All Back Home. And lacking in humor? You don’t even have to open the album for a dose of that – an hysterically funny depiction on the cover of what can happen when you don’t pay attention.

Those false criticisms have lasted through modern times, often by critics that are just recycling those old reviews. If you want to read a truly awful piece of music criticism, try the one by Jim Smith for allmusic.com. Sometimes old prejudices die hard.

Prine’s Common Sense shared a title with one of America’s great literary works by Thomas Paine. If there is one thing that should be apparent by now, it is that Prine never left literary references to chance. Written in 1974, released in 1975, it must have been an exceptionally dreary period for Prine, a songwriting empath more locked into the human condition than a “patriotic” one. Richard Nixon, who had won the presidency in 1968 under the guise of ending the Vietnam War and then prolonged it, doing just enough troop withdrawals to ride to another victory in 1972, had resigned under the scrutiny of election malfeasance. The U.S. was out of the war, but the war raged on until 1975. For Prine, a vet, “peace with honor,” a Nixon concept, fell well short of the mark. It had cost far too many unnecessary lives, both U.S. and Vietnamese. For Prine, peace WAS honor. It’s on Common Sense that Prine unveils the follow up to "Sam Stone", “He Was In Heaven Before He Died.”

On one of the album’s two radio hits, Prine sings

In the late 60s Barbara Lewis, an r&b singer and songwriter from neighboring Michigan, had disappeared from public view. Lewis had had several Top 40 songs in the early 60s but was nowhere to be found by the mid 70s. Prine wrote a tale of her imagined fate, and a chorus that strung her name together with a chant to a Hindu god and a French name meaning “with high regard.”

Selling bibles at the airport
Buying Quaaludes on the phone
Hey, you talk about a paper route
She’s shut in without a home

It was one of the quirkier song titles in rock history, which was probably why it received radio play and became a fan favorite. But it wasn’t a humorous tale. By the time he released Common Sense, Prine had seen his share of great talent thrown into the scrap heap of industry castoffs. In fact, he was in danger of becoming one himself.

On the other radio hit, “Saddle in the Rain,” Prine sings

Dreary? Yes. But a far more formidable album than critics were giving it credit for. It had to be in an era where radio play was often determined by industry “hit men” who greased the wheels with cash and cocaine. It was on talent alone, that Prine had survived the “three strikes, your out” rule.

Arif Mardin produced Prine’s first 3 albums. Common Sense was Prine’s first venture without Mardin, opting for Steve Cropper, a veteran of Booker T & the MG’s and the Memphis r & b community. Prine was clearly looking for something different and had stated so in subsequent interviews. It should have come as no surprise that it didn’t fall within the confines of the folk music genre. I guess for folk purists, horns were just a little too much. But for Prine, who was clearly channeling r&b this time out, it was the right thing to do. As for Jim Smith’s contention that “the cloying production overpowers the lyrics and relegates them to an almost cursory notion” – it’s absolute poppycock. That’s what happens when you view “Illegal Smile” as a celebration of recreation rather than a celebration of relief. Score one for the record buying public this time around.

Common Sense rode the steady airplay of “Come Back To Us Barbara Lewis” and “Saddle In The Rain” into the charts and, for many, introduced Prine’s songs in his own voice. As for big production, some of Prine’s best and most loved works have been big production numbers. “Lake Marie,” anyone? And fame, no matter how slow in developing, has allowed Prine to tour with bigger bands offering fans an opportunity to hear many of those early tunes in revamped format, both through concert appearances and a plethora of live albums.

Common Sense, though not intended to be, was as much prescient, as it was formidable. Who wouldn’t appreciate these lines during our time of self-isolation

And during a period when weddings and funerals, with a limit of 10 attendees, can both bring about depression, Prine predicts the circumstances of his own passing with “Wedding Day In Funeralville.” And if there’s no humor built into the lyrics (“what will I wear tonight”) then you’re not paying attention.

Common Sense closes with the only cover on the album, written by another great American wordsmith, Chuck Berry, “You Never Can Tell.” And only a folk purist could be offended by that.

Posted by Bill Glahn at 5:45 PM No comments: