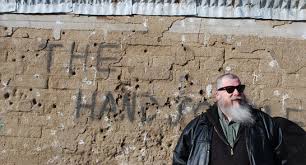 Most often lumped in as “Americana,” by streaming services and music publications, a lot of Willard Grant Conspiracy’s music echoes from more distant shores. While some “twang” may creep in on occasion, like a refugee from Dave Alvin’s Eleven Eleven album, it’s more helpful to think “Waterlow” from Ian Hunter’s Strings Attached album, the choral arrangements during the last minute of Fairport Convention’s “Meet On The Ledge,” or even the mood of Nick Cave’s The Good Son.

The other problem with defining WGC as Americana, is that Robert Fisher’s themes predate America by a good long stretch. They’re as old as the world. And The Willard Grant Conspiracy often embellish his songs more as a chamber orchestra – one that plays in the court of common folks rather than kings. And how do you pigeon-hole an album like In The Fishtank, a collaboration with Dutch Electronica outfit, Telefunk – with it’s world music drum loops?

Fisher, the vocalist and primary songwriter for WGC describes the band’s sound in more abstract terms: “…if you draw a picture, you draw a geography, you draw a good fictional place in time for something to exist in, it immediately draws a picture in the listener’s head, so when the audience is hearing the song, they’re drawing pictures upstairs. Same with film.”

Cinematic - if it isn’t a music genre, it should be.


Willard Grant Conspiracy flew so far under the radar in the United States that keeping up with their releases (and backtracking) has proven difficult. Some are only available as imports and a large number are out of print, even in this era of downloads. On a German TV interview, Fisher said, “I think in the U.S. the kind of music that we do is marginalized by the major labels and because media is not as accessible as it is here (Germany) for an independent label.”

Robert Fisher didn’t fit any major label’s image as a viable “pop star.’ A man of tremendous girth, he would perform at concerts, not prancing around the stage, but confined to a chair. With a band that couldn’t be easily boxed into a single genre, mass popularity wasn’t an option. Neither was abandoning his musical vision. “If I wasn’t here doing it today [in Europe], I’d be sitting in some roadhouse in the [California] desert doing it.” Like many artists that work on the fringe, Fisher supplemented his income with a day job – one that had flexible hours (real estate agent) until health issues intervened. All the while, writing new material.

The lone constant in WGC being Robert Fisher, it seemed that 2013’s Ghost Republic would be the band’s swan-song. Fisher had moved to Brodie, a former mining town in the California desert to write the album before passing away in February 2017.

So… along comes the news of a Willard Grant Conspiracy posthumous album, Untethered. Anything but a pillaging of the vaults, Untethered has been lovingly assembled by Fisher’s long-time collaborator, multi-instrumentalist David Michael Curry from the last recordings Fisher made. It’s a tough listen - sometimes harsh, sometimes beautiful, sometimes challenging.

Untethered opens with “Hideous Beast,” an unexpected curveball. Coming in under 2 minutes, it has more kinship to Ginsberg’s “Howl” than anything in the previous WGC canon. Fisher dispatches the rage he accumulated during a lifetime of hardships. It’s both frightening and necessary to understand the music that follows.


Fisher often wrote about pain and death. “Do No Harm” is one of the albums most beautiful songs and a coda of sorts to “Soft Hand.” More of a final prayer than a command, Fisher parts this world with the simplest of all requests: “Take my orders from the stone… do no harm when I sleep.”


The remainder of Untethered is a mix of instrumentals and reminisces. Addressing the paradoxical nature of humanity, he sings “I want to feed you to monsters/ your goodness will save you” ("Love You Apart"). The final vocal track, “Untethered,” is the only song written between Fisher’s diagnosis and death (a span of only a couple of months). On it, Fisher sings “Dreamed last night I was blown apart and busted/ sidestepped my way into the path of a hurricane/ for the first time in my life I felt untethered.” And then there’s “Trail’s End,” an instrumental that rolls along like the sound of the closing credits of a particularly fine movie. It may be the most cinematic Willard Grant Conspiracy album of them all. (Rating: beyond the ether.)