Bob Frank: By The Light Of The Lamp 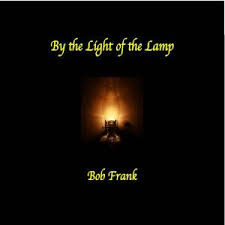 The first time I heard Bob Frank on the radio was in 1972, while travelling from Biloxi, Mississippi to Pine Bluff, Arkansas in a ’64 Chevy Impala SS– a journey with dubious motives. I loved that car and I loved the sounds coming out over KAAY’s Beaker Street program (Little Rock, AR). Back in New Jersey, a few month’s later, while I lay in a drug or alcohol induced stupor, a future in-law “borrowed” my keys to drive a mutual friend home. He hit four parked cars before he got to the end of the block, continued at high-speed from the scene of the crime, hitting a telephone pole about a mile further on. Fortunately, no one was hurt beyond a broken arm to the passenger. But that Chevy was toast.

In the March 2000 (final) issue of Live! Music Review, I wrote a story for our Roll The Tapes column about a recording of Bob Frank that had been passed to me by a Little Rock collector of rare tapes. Recorded at the Old Quarter in Houston circa 1973, the tape featured only one or two songs from the Vanguard album I had heard on Beaker Street plus a whole slew of unreleased ones – songs like “Cane Break,” “Bugs,” “Chipmunk,” & “Spring Fever” – songs focused on love and nature. Somewhere in that article I expressed that there was a gnawing, queasy feeling of “whatever happened to Bob Frank?”

What happened is this. Bob’s career on Vanguard met the same fate as that Chevy car. And at about the same time.

Bob explained it to me in a 2002 interview. “Vanguard wanted me to go on a tour. I said, not right now. Here’s how complicated the human mind is - what I really wanted to do was, jump right up and go on tour. That’s what I really wanted to do. But the words that came out of my mouth were, ‘No, not yet. I have a newborn baby, I have a garden.’ And what I was thinking at that time was, ‘Fuck these guys. They didn’t do what I wanted when I wanted it, so I won’t do what they want when they want it.’ I am not a very intelligent person. Never have been. Here’s what I thought. ‘Now that I have this album out, I will be famous overnight. Once people hear this album, they will come and buy it, and tell their friends and their friends will buy it, and whether I go on a tour or not, this album will sell itself, just because I am that fucking good!’

“Well, I knew nothing about distribution or promotion. Nothing about how to sell an album, how it works. How you have to advertise it. You have to promote it. You have to convince the public that this is the album they want. I had no clue about all of this. So, later on, I told ‘em, okay, I’m ready to go on tour now. And they said, not so fast. First you have to prove yourself. We’ll set up a gig at Max’s Kansas City, you play there. If we think you’re ready, then we’ll set up the tour. So, once again, I figure, Fuck these guys. (I used to love to say that. Fuck these guys. Made me feel independent.)

“So, I proceeded to fuck ‘em. I got up there and played every song I could think of except the songs that were on the album. When they requested ‘em, I said ‘If you want to hear songs from the album, go buy the album.’ (Manager) Cletus Haegert tells me I said this, I didn’t remember saying it but when he told me, it came back to me in a vague sort of way.

“I played all these song I’d just written about my garden and my baby. I stupidly thought these sophisticated New Yorkers were ready for this. I was ready for it. I thought the songs on the album were old hat already. I thought I was forging ahead. Blazing new trails. Heading off into uncharted territory. The trouble was, nobody wanted to go there but me. If I had played the songs off that album, I probably would have become famous overnight, because that was THE club back then.
“All the press was there. All the gossip mongers, the word would have been out. And they would have loved those songs at that time, because that’s about exactly where those folks were at. The glorification of alcohol and dope. (Songs like Wino, Return To Skid Row Joe, Memphis Jail, and Judas Iscariot in which Jesus and his Disciples were wine guzzlers and hash smokers.) Degeneracy at its most enticing. They would have ate it up.

“But here’s the story. I was stubborn. And I was drunk. I was stoned. And I was a romantic. I was living in a dream world.”

There are other reasons, of course. All you have to do is look at Buffy St. Marie’s Vanguard albums from the same period. Vanguard wasn’t Folkways. Although they had a reputation as an artist’s label with a social conscience, they also had a close eye on the popular charts. As with those Buffy albums, session musicians were often brought in at Vanguard’s “request.” Bob Frank’s self-titled album was no different. Frank hated Eric Weisberg’s overdub on “Judas Iscariot.” (the version appearing above was a re-recorded version from Keep On Burning.)

“Weisberg’s guitar was played with a pick, very strongly and very clearly, and also, alas, very boringly. He uses no dynamic fluctuation. Same force all the way through. Ruined it.” And Vanguard followed trends. The Summer of Love only lasted one summer and that was 5 years past. They didn’t want love songs. They wanted edgy. But not too edgy. Witness the other extreme, Patrick Sky. When  presented with the satirical “Songs That Made America Famous” he got the boot as well.

So, if Bob Frank’s musical career came crashing to an end, life didn’t. Frank forged one with a different set of rewards – a union job, four children, a Buddhist faith, with the same wife that he traveled around with all those years ago – and he never stopped writing songs. As he began to approach retirement in 2002, he started releasing albums again.

There have been some great ones – Keep On Burning (produced by Jim Dickinson and featuring members of the North Mississippi All-Stars), an acoustic collection of labor songs - Pledge of Allegiance, a collection of murder ballads with fellow southerner John Murry – World Without End,, and a splashing of near-great ones along the way. But other than one or two of the songs on that Old Quarter tape Frank has not gone back to those love and nature songs he used as a weapon against Vanguard.

But with life comes death. His wife, Deirdre, passed in 2014. By the Light of the Lamp contains those love and nature songs she fell in love with all those years ago. This is his tribute album to her - recorded the way he wanted to record them. And released at a time when love, again, is on the minds of a new generation. This time, Bob Frank got the timing right.