Behind The Lines With Grant Peeples 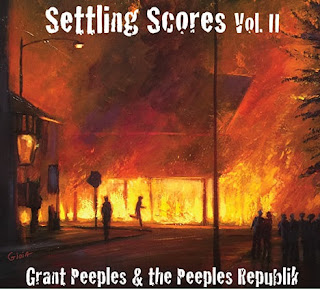 The title track of Grant Peeples last album, “A Congress of Treasons” was a spoken word piece that appeared last on the album. “Ever since I was a kid, all I really wanted to be when I grew up was a traitor – a spy for the other sides,” starts Peeples. He continues with a narrative about a plan to sabotage the “shopping carts of oppression” and recognizes that revealing those intentions have consequences. Yet “here I go again…” It’s a good starting off point for Settling Scores Vol. II.

What’s this plural use of “sides”? We live in an era that, by design, only recognizes two sides. A two-party system. A left-right divide where it’s “imperative” to adopt the views of one side or another or suffer the consequences.

Peeples describes himself as a “leftneck.” There are two syllables in that neologism, neither one necessarily geographic in nature. It’s too simple to look at Peeples’ origins and current home, the Florida panhandle, and generalize this as a “victory” by either side.  For those adhering to the “one or the other” mentality, Grant Peeples is no confederate.

Peeples elaborates, “I’m a socialist, but not politically. But rather socially, in a sort of Old Testament kind of way. In that first book of the Bible we are given the litmus test for being a human being: ‘ARE you your brother’s keeper?’ This is a metaphor, of course. But it’s not a rhetorical question; it’s a black-and-white question. And everybody should have to answer it, on the record. And the answer should go right there on your driver’s license, right below the place that tells whether you are an organ donor or not, or need glasses to drive.”

But, certainly, the Old Testament is treacherous territory when accepted as a whole. Artistically, Peeples claims a different lineage. On his website he describes his early years as “linear.” Until when? When asked to elaborate further, he responds, ”My first mentor was the ball’s-out, Tallahassee artist Jimmy Roche. A fearless sonofabitch who I think was the first environmentalist artist. Years ago I heard Jimmy tell a group of his students: ‘When I look at an art object, the first thing I try to evaluate is: what is this thing’s relevance to the culture?’ I think that when you look at those 40,000 year-old cave paintings from Spain and France, that that’s what you have to ask yourself. What do these paintings tell me about the culture, the times, the values, the world views of these people?  You think those guys back then crawled through hundreds of meters off narrow tunnels just so they could find an open cavern where they could paint some animals on the wall? Nope. I just want to be a descendant of that tradition.”

Peeples credits Roche with introducing him to the songs of Bob Dylan, first and foremost “Desolation Row” played on a Fender guitar. That plays big in understanding Settling Scores Vol. II. “Desolation Row” appeared on the album, Highway 61 Revisited - the first album by Dylan to feature electric instrumentation. As for it’s reputation for being “liberal,” many in the Folk community greeted Dylan with the “traitor” tag. The “Judas shout” was well-documented on bootlegs for years and is now permanently embedded as a commercial release as well (The Bootleg Series Vol. 4).

But Folk conservatism didn’t end there. As Folk “evolved” into its present state, a peculiar whiteness has developed. For all its lip-service to social causes, songs addressing race issues are lacking.  Acoustic instrumentation by white artists is acceptable, but artists like Otis Taylor get tossed in the Blues bin of Internet streaming. Peeples stands out as an exception, with songs like “Nigger Lover” on Prior Convictions, “Pitchforks & Torches” on Settling Scores Vol. II, and even on the epic “New Brownsville Girl” where he states, “A lot of songs have been written about the state of Texas,/ but me, I never cared much for it/ it was stolen outright and soaked in Indian blood.”

About “More For Us, Less For Them” a key track on Settling Scores Vol II, Peeples states, “Years ago, folk music got adulterated by a bunch of Yankees with guitars who learned a few Union songs and then took their hands off the wheel of the culture and started writing and singing about their feelings. Its Carol King music, but with two capos and drop D tuning. The intro, or the pre-song of ‘More For Us, Less For Them,’ is the chorus of my song ‘My People Come From The Dirt,’ and Gurf Morlix, who is singing it, invoked an even more traditional sound here than we had on the original recording. Our intent was the stark juxtaposition of hip-hop and mountain sounds in the telling of what is, essentially, the same story. I think Eminem and Macklemore have written some great folk songs.”

If there seems to be some cultural chauvinism to that first sentence, consider this one. Peeples on gun control: “I have a concealed permit. I legally carry a gun. This isn’t a philosophy. Just like abortion isn’t a philosophy. It’s just a choice. Like abortion is a choice. I have solid reasons that are the foundation of that choice. One day I hope that I may choose differently. Meanwhile, I prefer soft-handed suburbanites who have never pulled a tick off their balls---or shot dope, or seen the inside of a jail or a woman get pistol whipped in a parking lot---to not think they know if it’s right or wrong for me to carry a gun.”

When Jimi Hendrix dropped “Are You Experienced?” on the world, people assumed it was a song about drugs. But it wasn’t a rhetorical question any more than “Are you your brother’s keeper?” Buried in the mix, the last five words may be the least noticed in the whole song. You don’t get to Jimi on the first Experience record without Jimi on the Chitlin’ Circuit. Peeples may have taken a different highway, but with Settling Scores Vol. II he’s entering similar territory.